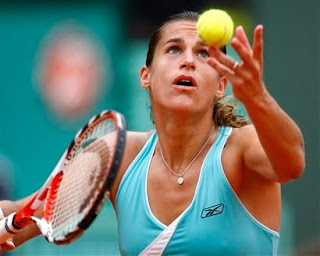 Two time Grand Slam winner Amelie Mauresmo announced her retirement today at the age of 30. Citing a lack of interest in training for 2010, Mauresmo held back tears during her press conference as she announced the news. “I had to make a decision, which became evident in the last few months and weeks,” said Mauresmo whose last title on the women’s tour came in Paris at February’s Open de Gaz at the indoor Stade Coubertain. “It's a bit sad, but this is the right decision. I was lucky enough to have an exceptional career and to experience very strong feelings on the court.” Mauresmo was one of a handful of all-court players left on the women’s tour and many felt that Mauresmo’s natural athletic game was hampered at times by a lack of belief. Her breakthrough Slam wins in 2006 at the age of 26 was inspiring to many as she achieved them in the later stages of her career. Mauresmo also endured her share of detractors and fans by being one of the few openly gay player on the tour. The tennis world will miss her and the great poise she brought to the courts. What do you guys think about her retiring? Let us know what you think.