Long before Babolat produced performance tennis racquets they introduced racquet string to the world. The "double line" logo on the string beds of some of the world's best players demonstrates the company's contribution to innovation. In 1994, Babolat launched its first tennis racquet and in 1998 Carlos Moya won the French Open becoming the first player to win a major championship with a Babolat racquet. Rafael Nadal's endorsement of the Aeropro Drive helped establish the brand in North America as well as all-around the world. With innovations such as the Woofer System, Aerotech, and Babolat Play, the brand has become one of the leaders in the tennis industry.

Below are the technologies that we have for Babolat:

The Babolot Aero Series is considered to be one of the most aerodynamic tennis racquets in the world thanks to AeroModular technology. With air penetration rated at +15% and better air resistance 95% of the time you'll benefit with a faster swing, greater spin on the ball and significantly improved control over the ball. This in turn also leads to increased racquet head-speed throughout the entire swing pattern, which consistently produces sharper, cleaner shots resulting in more powerful serves, more penetrating ground strokes and crisper volleys.

Babolat has focused on aerodynamical advantages for some time now and the Aero Pro Racquets were one of the most-respected racquets in this line. The unique racquet boom is shaped like a wing to cut down on drag. The Aero Pro Racquets have been designed to improve speed and tennis racquet maneuverability. The figure below illustrates the variety of tubing all throughout racquet. They have been professionally designed and engineered to significantly improve one's game.

AeroModular 2 was the second iteration for Babolat Aero racquets. This gives frames a more "wing" shaft design allowing for faster swing movement through the air. This aero dynamic beam makes it even easier for players to generate a fast stroke speed with remarkable ease.

Babolat has revamped this ground breaking technology to another level: AeroModular 3. You will find this tech in the 2019 Pure Aero line which integrates the bumper and grommets and an optimized design to increase racquet head speed as well as spin. On May 24, 2012 at Roland-Garros, Babolat introduced the first Play & Connect Racquet. The Pure Drive Play tennis racquet packed an accelerometer, gyroscope and microprocessor into the handle of the racquet to collect data while you play. The sensors and processors collect information on shot power, spin, consistency and more. The data then can be uploaded to your iOS or Android device for your analysis and improvement.

Carbon Ply Stabilizer is a new generation of high performance carbon fiber technology that is powered by Chomarat. Chomarat is a french industrial group that has continuously innovated composite materials for automotive, aeronautics and marine construction. This carbon fiber material is utilized in other sports like biking, skiing and windsurfing, but now it is going to be added into tennis. This stabilizer is added to the 2019 Pure Aero racquet line to add more control, precision and stability on every shot.

The Cortex Dampening System interface transmits useful information to the player and the handle design brings that information closer to the player's hand for perfect control on every hit. Cortex has been a vital technology for Babolat to help their racquets minimize vibrations during play.

Cortex Comfort is 20% more comfortable, combined with a new shaft construction, allowing a perfect absorption of right vibrations until the player's hand to feel the ball better.

Intermediate Cortex is a dual-material construction with an initial CDS interface for maximized feel combined with a second, more flexible CDS material for optimal comfort upon striking. It’s the perfect compromise between comfort and feel. 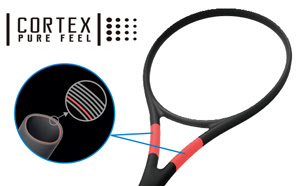 Cortex Pure Feel Powered by SMAC has taken Babolat's signature technology to the next level. SMAC is an innovative French aerospace company that specializes in vibration analysis. For more than 70 years, SMAC's technologies have proven its technological prowess through development and innovation. Primarily their technologies are used for airplanes and space shuttles but now, thanks to Babolat, SMAC is incorporating their innovations into tennis racquets. For optimal vibration absorption, Babolat has integrated SMACWRAP® technology to develop Cortex Pure Feel. The dampening technology is placed in the racquet head to provide the best possible feel, unrivaled comfort and great sound.

Babolat is taking their Cortex technology even further with the creation of C2 Pure Feel in the 2019 Pure Strikes. This is also powered by SMAC to give you a cutting-edge vibration filtration lay-up system that brings great feel on every shot. 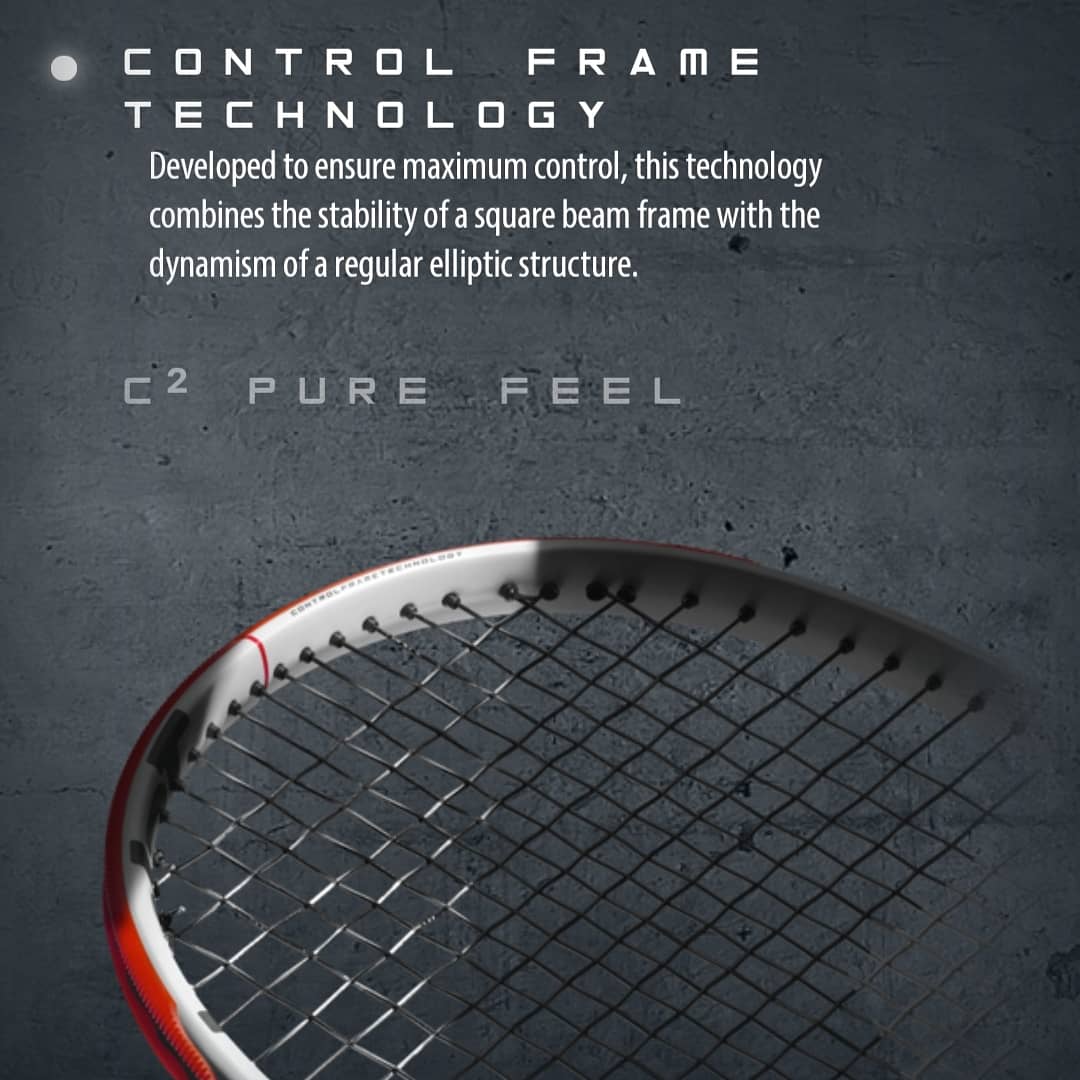 Since 2015, Babolat has been utilizing Frame String Interaction technology in its tennis racquets. This has allowed the Woofer system to bring more feel to the player with each strike of the ball and a tighter stringing pattern in the sweetspot area.

Babolat changed this technology to FSI Spin for the release of the 2016 Pure Aero line. FSI Spin technology has a more open string pattern with a redefined sweetspot and oblong grommets at 6 and 12 o'clock allowing for more string movement to generate maximum spin. This has now been updated in the 2019 Pure Aero line with oblong shaped Spin Grommets to increase spin and allow for a longer contact time.

For the revamp of the Pure Drive and Pure Strike racquet lines, Babolat decided to add FSI Power. This change adapts a new string pattern and new diamond shaped grommets to provide an improved sweetspot over the whole width of the frame. Players can maximize their power on every shot including off-centered hits.

Babolat invents the first ergonomic grip perfectly shaped for you hand.The entire palm of the hand is in contact with the grip.

The Woofer system was first introduced to the world in 1999. This was the first and most effective frame-string link system for a 25% longer ball to string contact time for greater control, and a sensation of comfort.

Woofer Grommets have been updated for the 21st century to make racquets even more aerodynamic while also increasing the ball pocketing and trampoline effect.