Clijsters Immortalized as a Barbie doll 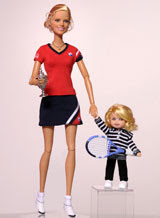 The U.S. Open champion, Kim Clijsters was immortalized today as a Barbie doll, and her daughter Jada is also now available in a mini-version of the doll as well.

The doll was revealed today on the opening day of the world's largest toy fair in Nuremburg, Germany. She is the first female athlete to be immortalized by the world's leading doll brand.

Clijsters said in a statement:

"When I was a young girl I played with my Barbie dolls ... My family means everything to me, so I was really excited when I found out that Jada would also receive her very own 'Jada Barbie' doll."

How many of you want to get these dolls for your kids? You might have to wait because this is a one of a kind doll, although there is a possibility of retail distribution later in the year.