Does Federer Need to Take a Break after Losing the open? 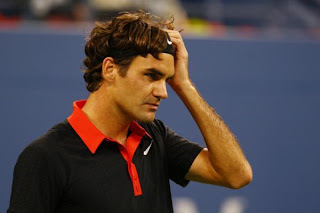 Roger Federer, the world #1 on the ATP tour pulled out of both the Japan Open and Shanghai ATP Masters 1000 tournaments, citing fatigue as the reason for withdrawing from both tournaments.

Could he be tired after losing to Del Potro at the US Open a few weeks back, last year after crushing Murray at the '08 US Open he played in both tournaments with no problem.

"I'm disappointed that I have to withdraw from Tokyo and Shanghai as they are two of my favorite cities," Federer said. "The fans have been great to me over the years."

Is he saving himself for the year end ATP World Tour Finals in London at the end of November?

Or he is just still disappointed he lost to Del Potro in New York? Some would play both tournaments to redeem that loss in New York.

Maybe, truthfully, all he wants to do is to finally get some time with his new family. I know if I had had newborn twins at home and wife, I would want to spend as much time with them as possible before having to defend my title next year. Which begs the question, why not just state this. I think he's earned the right to take some time off regardless what people say.

On a side note, US Open champion Juan Martin del Potro and #3 Andy Murray are both scheduled to play in the Japan Open, which has $1.3 million in prize money.

Thoughts? Comments? I wanna know what you guys are thinking...I know I would hate to drop out of the Japan Open, Tokyo is an awesome city but then again family comes first.