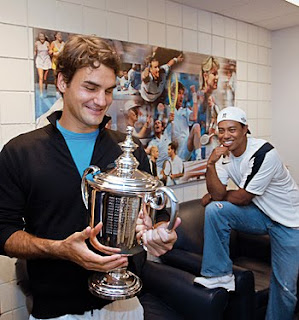 Roger Federer says he's contacted his buddy Tiger Woods by phone and predicts he will be back soon “as the wonderful golfer we know.”

The tennis star admitted in an interview published Friday that Woods is going through a difficult time with his career and most importantly, his family.

According to the interview:

“The tabloids are going crazy, sponsor contracts are falling apart. ... I’ve always been aware that the image you patiently construct for an entire career can be ruined in a minute,” Federer said. “It scares you a bit, but that’s the way things are.”

Woods hasn’t been seen in public since the accident, and other friends have said they have tried — unsuccessfully — to reach him.

It's great that Roger Federer is being supportive of his buddy, Tiger Woods.