Ivanovic is leaving the golfing world and is returning to Tennis 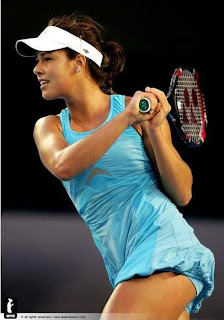 After spending some time on the golf mounds, WTA player Ana Ivanovic is returning to where she belongs. . .the tennis courts.

“I've already started training again, to be ready for the new season. At the moment it's just fitness, but tennis will start next week, with my coach Sven”, she states.

Though she prefers to keep her relationship with Adam Scott, Australian golfer, as secret as possible, she admitted that a month of following him on tournaments was a great time. “I had a good break. It was just what I needed!”

For Ivanovic vacation time is over and now it’s time to begin working and getting ready to compete. In February, Serbia plays Russia in the first round of Fed Cup and if Serbia wins all rounds, the final will be played in Belgrade.

Yet she remains realistic stating, ““It’s a very exciting thought and for sure we have a chance. Playing at home in Belgrade will help and I’m really looking forward to the Russia match in February.”

What do you guys think about Anna Ivanovic’s return to the tennis world? Do you think Serbia has a good chance at beating Russia? Let us know in the comments below.