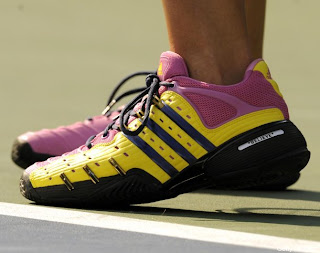 After Melanie Oudin upset over No. 13 seed Nadia Petrova, she continues to draw attention. Not only due to her great athletic abilities on the court but recently over the Adidas Barricade V shoes had she worn during the match.

The shoes in question were customized by Oudin herself and according to Adidas; they are not available to the public. I think after her winning streak at the US Open this year and her sudden rock star status, they will reconsider this decision.

The shoes are actually the Barricade V; however Oudin customized the design with the help of her 15 year old boyfriend. Yup, that’s right. Her boo actually gave her the idea to put “Believe” on the sole of the shoe instead of her name which is commonly practiced. Though the shoes and its bright colors aren’t the usual the fashion of tennis, I actually see them taking off.

Oudin’s fans will want to show their support by buying them and these bright colors will become a common staple on the court.