The Bryan Bros. new CD, "Let it Rip", is now on Amazon 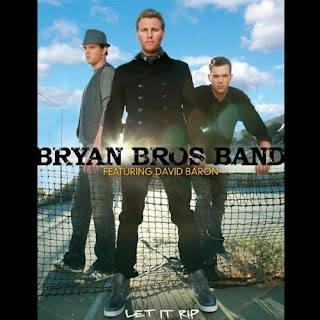 Mike 'n Bob's new CD, Let It Rip, is now out exclusively on Amazon where you can listen to samples of each song.

We at Tennis Express didn't know what to expect until we heard the album. It turned out to be a nice blend of well-written lyrics, finger-style guitar riffs, rockin'piano and great singing. The Bryan Bros keep amazing us with their talents both on and off the court.

Apparently, they recorded the tunes during the two weeks they were in SoCal playing the Los Angeles Open. They wrote the songs with their friend and Bryan Bros. bandmate, David Baron, a very talented singer, songwriter and piano player, who resides in San Francisco and also attended Stanford. This trio has performed in Delray Beach, Houston, London, Hollywood, Sacramento, and New York in the past few months.

We think you'll really enjoy Let It Rip, Spending My Days, Chasing the Sun, and Marching On. They are almost done with their fifth tune, Autograph.

Tennis Express will be carrying this cd soon and you will be able to buy it online as well as our store location.

The Bros. have had a great Summer tennis season, winning Los Angeles, reaching the finals of Wimbledon and Cincinnati, and making the semis at Montreal and the US Open. After a few weeks relaxing at home, they will journey to China to play Beijing and Shanghai, and then on to Europe to compete at Basel, Paris and the season ending Masters Cup in London. They will play a series of charity events and exhibitions in early December.