The Woz says Posing in Bikinis is Good for Women's Tennis 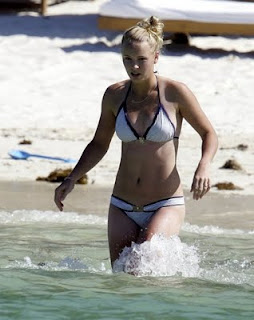 We found some great pics of Wozniacki hanging with her friends at the beach after a hard day at the courts.

As you know, Wozniacki posed in bikinis earlier this year for FHM magazine and said she thought it's good for women's tennis if the off-court and photo shoots bring more attention to the game. What do you guys think?

Metro.co.uk: Your teen rival Victoria Azarenka has stripped down to pose in her bikini. Is that good for women's tennis? Would you?

Wozniacki: I think it's good. If that's a thing players choose to do I think that is a good thing. As long as you have good results on the court I think it brings more attention to the tennis to do some modelling outside of tennis. It's OK. I have done a lot of pictures and things. I haven't been in a bikinis and showing too much. Right now I feel best with my coat on. It's up to every player individually to know their limit.