Tiger Beats Federer for Athlete of the Decade 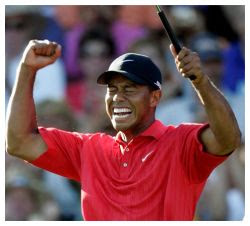 So, Roger Federer was listed third in AP's Athletes of the Decade today. Tiger Woods was first and Lance Armstrong came in second.

What is this crap? How can golf be considered a sport? Don't get me wrong, I understand all the mental aspects of the game but how on earth do golfers drive their bodies to physical exertion as much as tennis players or any other athletes?. For goodness sakes, all they do is stand in one place and hit tiny white balls into holes in the ground.

Some golfers can't even be bothered to walk and instead have little cars that drive them around. Everything in that game is catered. They don’t even carry their own golf clubs and instead have a caddie do most of the physical work.

I will acknowledge golf as a cerebral game and that it takes intense focus and concentration. But so does chess but I don’t think anyone would dare call it a sport (though I’ve had some intense chess matches myself and I know first hand how mentally exhausting it can be).

I will admit that Tiger Woods has done a lot in making the game of golf far more exciting than it use to be and he truly is an amazing player of the game. If you doubt it, check out this series of his greatest shots here but can we really call him an athlete?

I don’t know if I would consider Roger Federer the No 1 athlete of the decade but without a doubt he is an athlete. So, I guess what the important question here is what makes an athlete? Is it the game they play, the amount of physical or mental prowess they exert, etc?