Will Serena’s Meltdown Be Good for Tennis? 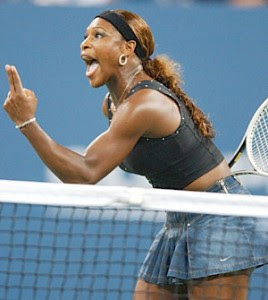 Last night I had dinner with my father and since he knew I worked for TennisExpress he wanted to know “What’s the deal with this Serena woman?” The question caught me off guard. Let me point out that my dad is in no way interested in tennis but even he had heard of what happened.

I proceeded to explain to him about her meltdown, her record-breaking fine and the controversy behind the whole ordeal. But my dad still couldn’t grasp what the big deal was. I had to explain to him the concept of sportsmanship and how tennis fans felt she didn’t live up to the standard that tennis players pride themselves on.

Now I neither condone or condemn Serena for her behavior but what interested me is the idea that Serena’s meltdown may have, even briefly, increased awareness of tennis to the public at large.

I mean here was my dad talking about “this woman, Serena,” my dad who prefers Mexican boxing over any sport. He even asked me to let him know when she’ll play again, so he can watch. Perhaps, more non-tennis fans will be driven out of curiosity to watch live tennis more.

I don’t know if Serena will be able to keep her cool for a full two years. She’s admitted to having a volatile temper when it comes to competing. And as you know, most people like to see a train wreck.

Do you think Serena’s meltdown will get more people to watch tennis on tv, even if it’s just out of curiosity to see if she might lose it again?