Tennis enthusiasts are starting to witness Melbourne magic at the 2023 Australian Open. Play is underway and roughly 900,000 spectators will watch history unfold during the next two weeks.  Before we look too far ahead, let’s recap last year’s memorable moments.

Ash Barty became the first local female to win the AO title in 44 years. She was dubbed a hero after defeating Danielle Collins in straight sets. Yet, Barty shocked the tennis world when she retired two months later. Rafael Nadal defeated Daniil Medvedev in a nail-biting men’s final. It was Rafa’s record-breaking 21st Grand Slam victory and his second win in Melbourne. His first was against Roger Federer in 2009, making Rafa the first Spaniard singles player to ever win the Australian Open. The King of Clay also won the 2022 French Open last year, extending his Grand Slam titles to 22, more than any player in the history of the game.

Novak Djokovic was deported prior to the start of the AO last year due to his Covid-19 vaccination status. However, Melbourne Park adopted new rules this year. Aussie organizers removed vaccine restrictions for both visitors and players alike. Of the top 100 men and women pros, approximately 30%  remain unvaccinated. 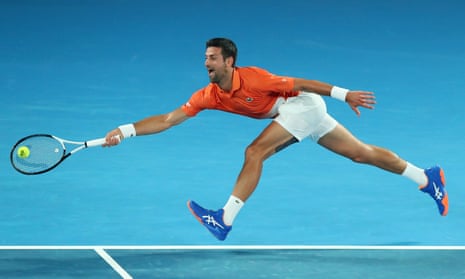 Current odds have Djokovic favored to win. But before he makes it to the Rodd Laver Arena, he could potentially face Andrey Rublev, Dominic Thiem, Holger Rune, Pablo Carreno-Busta, John Isner, Alex de Minaur, or Grigor Dimitrov. All are playing at the top of their game. Also, Djokovic could potentially meet Rafa, Karen Khocanov, Frances Tiafoe, Hubert Hurkacz, Daniil Medvedev, Stefanos Tsitsipas, or Felix Auger-Aliassime in the finals, since they’re all on the other side of the draw.

Fans will miss their local favorite, Nick Kyrgios, who withdrew earlier in the week due to an injury. Carlos Alcaraz is also out of the hunt. The 19-year-old Spaniard is still nursing a right leg injury.

For the women’s singles, there is a long line of front-runners.  Among them are Bianca Andreescu, Danielle Collins, Jelena Ostapenko, Coco Gauff, Petra Kvitova, Madison Keys, Maria Sakkari, Caroline Garcia, Aryna Sabalenka, Ons Jabeur, and the No. 1 seed Iga Swiatek.

Missing out on a Melbourne final will be Garbiñe Muguruza who lost in the first round, Simona Halep, who is still suspended after testing positive for a banned substance last year, and Naomi Osaka, who recently announced her pregnancy.

The competition will also go up against some other Melbourne mayhem. The weather has been anything but predictable. Melbourne has been experiencing torrential downpours coupled with brutal heat. These playing conditions are giving the pros a run for their money. Speaking of money, this year’s purse is $2,975,000 for the champions, $1,625,000 for the runner-ups, and $925,000 for each semi-finalist.

Gear and Swag at Melbourne

Magic will be made using some pretty cool gear this year. Top-of-the-line racquets from big brands like Babalot, Head, Wilson, Yonex, and Tecnifibre will be featured as an instrumental part of the show. Flashy colorways are being showcased too. Pros are wearing their sponsored brands and dressed from head to toe in victorious style. For example, Adidas and Nike have entire collections debuting in Melbourne. These innovative designs are loaded with technology and will help the athletes warm up, stay cool, and make the shots of their careers.

Likewise, Asics, Diadora, Lotto, and New Balance will be paraded across the courts in Melbourne.

In fact, Coco will be wearing her signature New Balance Unisex Coco CG1 D Width Tennis Shoes. This will be the second appearance these shoes have made at a slam. The first was during last year’s US Open where Coco lost to Caroline Garcia in the quarter-finals.

Finding the best price on your favorite tennis gear, shoes, and apparel is not an illusion. Check out the savings and inventory at TennisExpress.com today!

Check out these Resources:

Year of the Rabbit Tennis Pros